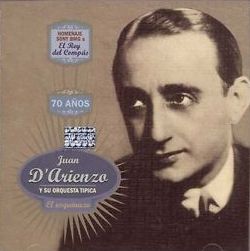 The Basics
Juan d’Arienzo (December 14, 1900-January 14, 1976) was a violinist, pianist, band leader and composer. His nickname was “El Rey del Compas” (The King of the Beat). D’Arienzo was born on 14 December 1900 in the Buenos Aires neighborhood of Balvanera. His orchestra  is considered one of the "Big Four" orchestras of Argentine tango, along with: Carlos di Sarli, Anibal Troilo, and Osvaldo Pugliese. They recorded over 1,000 tangos, valses, and milongas. He worked with the following key singers: Alberto Echagüe, Héctor Mauré, Alberto Reynal, Armando Laborde, Jorge Valdez, and Mario Bustos.

D'Arienzo began by playing jazz, at the age of 15, but was beginning to play tangos by the age of 18. He was a member of a youth orchestra which also featured Ángel d'Agostino on piano. In his early years, he played, as did many musicians of that period, in theaters playing music for silent films and in the cabarets including: Abdullah, Palais de Glace, Florida, Bambú, Marabú, Empire, Chantecler, Armenonville. He played in many small orchestras, and loved the nightlife. He once wrote, "We were beginning to live only at four in the morning... At the cabarets, you played all night through, people danced, had fun, they stayed til sunrise and the muscicians strained themselves." 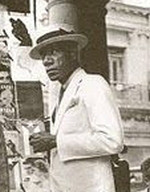 In 1928, his orchestra was playing at the Florida Cabaret. They had replaced Osvaldo Fresedo's orchestra and it is here that the famous announcer, Príncipe Cubano (The Cuban Prince) (pictured left), anointed d'Arienzo "El Rey del Compás (The King of the Beat)." As d'Arienzo explained it,

"Mine was always a tough orchestra, with a very swinging, much nervous, vibrant beat. And it was that way because tango, for me, has three things: beat, impact and nuances. An orchestra ought to have, above all, life. That is why mine lasted more than fifty years. And when the Prince gave me that title I thought that it was OK, that he was right."

In 1928, he recorded for the first time with his own orchestra, Juan D'Arienzo y Los Siete Ases del Tango. They recorded 44 sides, with the estribillistas: Carlos Dante, Francisco Fiorentino, and, the female singer, Raquel Notar. Other notable members of the orchestra were Ciriaco Ortiz (bandoneon) and Luis Visca (piano). The beat that Príncipe Cubano was commenting on was evident in these recordings and was a return to the beat of the Guardia Vieja period, which many orchestras had abandoned. The beat of the Guardia Vieja movement had a strong driving staccato dance rhythm, D'arienzo's adherence to this would place him in the Canaro school of tango.

In 1933, he appears playing violin with his orchestra in the movie, "Tango." This was the first Argentine film recorded with sound.

In order to understand, why d'Arienzo was such a big deal, we have to look at what had been going on in regards to tango music at that time.

In the mid-1920s, tango music had experienced a change with the emergence of the Guardia Nueva (New Guard) movement. During this period, more classically trained musicians began to join and form orchestras, and were influencing the largely self-taught musicians of the previous generation. Some of the older generation would say things such as "They have turned tango into church music," because they were working more with melody and harmony than rhythm. They were more avante-guard, focusing on robust, complex arrangments and a slower tempo, than that of the Guardia Vieja period.

This, along with the Tango Cancíon (Singing Tango) movement from the 1910s, meant that tango could depend on a larger audience than just tango dancers. They could play at concert halls and sell records without worrying about dancers. Tango dancing did not "die" during this time period, but it did decrease in stature and many people abandoned dancing tango, because most of the music being produced did not facilitate dancing. To understand this, let's listen to some music.

Another popular style of tango at this time was Tango Cancíon, which featured the singer over the music. Tango Cancion was born, in 1917, with Gardel's recording of "Mi Noche Triste." It usually consisted of just a guitar and a singer, featuring melodramatic and sad lyrics. Dancers were not the primary concern with Tango Cancíon. Here is an example by Carlos Gardel called "Caminito" from 1926.

And finally, here is an example of a typical song from the Guardia Nueva period, by Julio de Caro called, "Flores Negras." As you can hear, it is very complicated and with no clear rhythmic beat for dancing. It is beautiful music and great for listening, but not at all for dancing tango. This caused a serious decline in tango dancing during this period.

1935 to 1939 - The D'Arienzo Revolution
In the early 1930s, d'Arienzo's return to the clear, staccato rhythms of the Guardia Vieja period, gained him a following. And, in 1935, he returns to the recording studio and was a huge success. In later years, d'Arienzo would comment on the Guardia Nueva movement, by writing:

"Young people like me. They like my tangos because they are rhythmic, nervous up-tempos. Youth is after that: happiness, movement. If you play for them a melodic tango and out of beat, surely they won't like it. That's what happens. Now there are good musicians and great orchestras that think that what they play is tango. But it is not so. If they don't have timing there's no tango. They think they can make popular a new style and perhaps they can be lucky, but I keep on thinking that if there is no beat there is no tango. As professionals I have respect for them all. But what they dig is not tango."

Also, on the Tango Cancíon movement:

"In my point of view, tango is, above all, rhythm, nerve, strength and character. Early tango, that of the old stream (guardia vieja), had all that, and we must try not to ever lose it. Because we forgot that, Argentine tango entered into a crisis some years ago. Putting aside modesty, I did all was possible to make it reappear. In my opinion, a good part of the blame for tango decline is on the singers. There was a time when a tango orchestra was nothing else but a mere pretext for the singers. The players, including the leader, were no more than accompanists of a somewhat popular star…

Furthermore, I tried to rescue for tango its masculine strength, which it had been losing through successive circumstances. In that way in my interpretations I stamped the rhythm, the nerve, the strength and the character which distinguished it in the music world."

From these two quotes, you can clearly tell how he felts about these movements, and also, what a modest person he was ;-). He once said, "With me one hundred thousand tango orchestras and neighborhood clubs flourished."

Of course, d'Arienzo did work with many great singers such as Hector Maure, Alberto Echague and Jorge Valdez and sometimes did put them out front. He also made himself somewhat of a star and loved to enthusiastically direct the orchestra during live performances. Below are some live videos of his orchestra from the 1960s. D'Arienzo said of his direction:

"When I direct I am justifiably natural. And I transform. As I direct I take what I feel. Simultaneously I pass on my feelings to the musicians and they, to the public... Before I directed with the baton, now with my own hands: they are more expressive.

Do not think that this is just for the public to see - it is used as a defence by me. I use it well. A look implies a mistake by someone, something that is not played well. They are used by me as a course when I see a loose element, or someone is distracted. I encourage and demand that you be aware, and encourage you with enthusiasm."

Of course, not everyone liked d'Arienzo. Many of the devotees of these movements, saw this turn to the strong beat, as simplistic, regressive and as a serious step backwards for tango music. But the dancer's loved it and between 1935 and 1939, he recorded 116 sides and sold more than Canaro and Troilo combined. In fact, his records were so popular that people were buying little else. Supposedly, some record stores required that you buy something else, in order to by one of his records.

Unfortunately, no masters from that period remain. Everything we listen to today are recordings of 78s and LPs. So, let's listen to "Hotel Victoria." It was recorded during his first recoding session, in July of 1935. Lidio Fasoli is on piano. It is a solid song and clearly shows a return to the Guardia Vieja rhythm, but is nothing "special." But, contrast this to "Flores Negras" and you can see why dancer's responded to d'Arienzo. 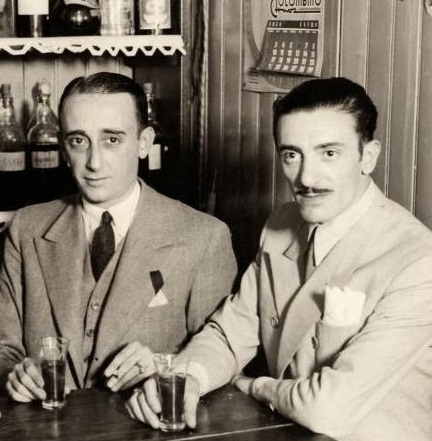 D'Arienzo and Biagi
The defining moment of d'Arienzo's career came in 1935 when he added Rodolfo Biagi as the pianist for his Orchestra. Biagi had just returned from working overseas and d'Arienzo had grown tired of Fasoli showing up late.

Together d'Arienzo and Biagi created his signature driving staccato sound. Soon after, Biagi began writing new arrangements of the songs, creating an even more staccato, uptempo sound than that of the Guardia Vieja. They also increased the orchestra size by increasing both the violins and bandoneons to five each. This filled the songs with a, thus unparalled, aggressive energy that dancers and listeners loved. Let's listen to their first recording together "Nueve de Julio."

Ok, so a style is developing, but what makes Biagi so special, as a piano player? Why was he given the nickname "Manos Brujas (Witchy/Magical Hands). Let's listen to another song from two years later, their interpretation of the seminal piece "El Choclo." Here, we will hear his magical hands at work connecting the phrases and adding little accents.

By 1938, d"Arienzo's orchestra was at the height of its popularity. He was just 35 years old, one less than Julio de Caro, but stylistically at the other end of the musical spectrum of tango. His records were selling and they were regularly playing on radio shows. But remember, above, when I made the joke about d'Arienzo being modest? Well, audiences had been becoming bigger and bigger fans of Biagi, and at a concert later that year, after a performance of “Lágrimas and Sonrisas,” the audience clapped until Biagi finally stood up and took a bow. As the story goes, d'Arienzo walked over to him and said, “I’m the only star of this orchestra. You’re fired.”

Some doubt the story surrounding Biagi's firing, and it very well may not be true, but I do find it interesting that Biagi recorded a far superior version of "Lágrimas y Sonrisas" three years later featuring some "standing ovation" worthy piano playing.

However, this split did not seem to slow either of them down. In just two short months, Biagi put together a full orchestra and signed a record contract and a radio contract. D'Arienzo replaced Biagi with Juan Polito, and was back in the recording studio just two weeks later. D'Arienzo often said, "The foundation of my orchestra is the piano. I regard it as irreplaceable." Juan Polito might not have been Biagi, but he was pretty close and D'Arienzo continued down the path that he and Biagi had developed. Then two years later, Polito would be replaced with Fulvio Salamanca. Here are the major piano players that played with d'Arienzo.

Some of Clint and Shelley's Performances and Classes to D'Arienzo:

Resources for this Article: