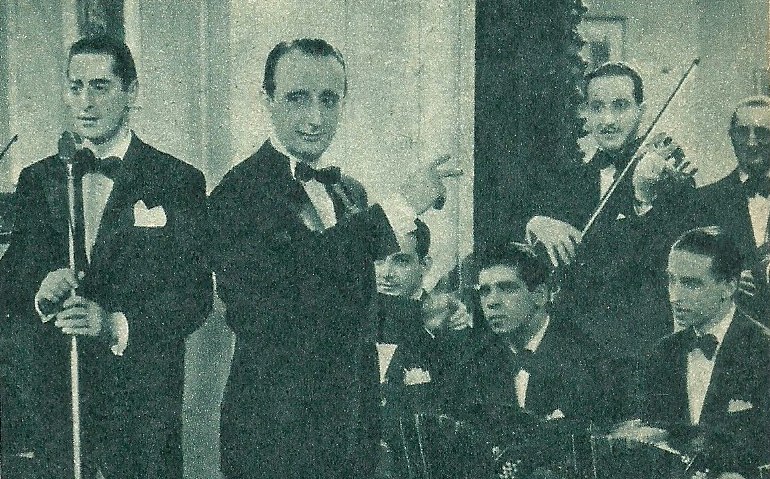 The 1940s
In 1940, D'Arienzo talked bandoneónista Héctor Varela into letting him take over his newly formed orchestra.  They also recruited, the pianist, Fluvio Salamanca, who was only 18 years and well-known violinist Cayetano Puglisi. Salamanca would work with D'Arienzo for the next 17 years and they would record 380 songs together.1 The decade started off with Alberto Reynal (pictured above) and Carlos Casares on vocals, but they were quickly replaced with Héctor Mauré.

Mauré was born Vicente Falivene, of Italian descent, in the barrio of Palermo. His father was a policeman and, as a young man, had to make a decision to persue his love of boxing or of singing. He chose singing and worked for Aneselmo Aieta's orchestra, Orquesta Característica Porteña, and the orchestra of Alberto Pugliese (Osvaldo Pugliese's brother). In 1937, he won a radio contest for singers sponsored by Radio Belgrano, which had 5,000 contestants. The prize was a six month performance contract worth 500 pesos per month.

In 1940, Mauré auditioned for D'Arienzo's orchestra and got the job. His delivery was smooth and nuanced not as rough and "from the street" as Echagüe's. Eduardo Visconti describes Mauré thusly "his interpretative line was dramatic and at the same time melodic. A particular voice, with a baritone record, pleasant timbre and clear diction, a powerful, melodious and refined voice, of Gardelian style."2

After joining, it was not clear if Mauré was a good match for D'Arienzo's hard driving, less melodic structure, but it worked. Compromises were made, the orchestra kept its drive, but did slow down and created slightly more complex arrangements that better fit Mauré's style. The results were clear, between 1940 and 1944, they recorded 50 songs including many that are still popular with dancers today: Nunca Más, Dime Mi Amor, Sobre el Pucho, El Olivo, Humillación, Ya Lo Ves, Infamia, Tierrita, Compadrón, Cicatrices, Tango Brujo, Si La Llegaran A Ver, Enamorado (Metido), Lilián, and finally, Amarras.

In 1944, D'Arienzo talks Echagüe into rejoining the orchestra. Later in the year, replaces Mauré with Armondo Laborde (1944-1949). This is not a good period for the orchestra, but they did manage to produce a few strong tangos, featuring the power of Echagüe's vocals, including: Cartón Junao, Barajando, Chichipía, and Farabute. These tangos are bold, full of energy and are some of my favorites for dancing. They are not for the faint of heart, nor for pitter pattering around the dance floor.

Below is a clip of D'Arienzo and his orchestra performing at the Chantecler, in a film from 1948:

The 1950s
The orchestra starts 1950 off with two strong instrumentals, El Internado (1950) and Canaro en París (1950). After this, his arranger and lead bandoneonista, Héctor Varela, leaves to start his own orchestra and D'Arienzo puts his pianist, Salamanca, in charge of creating arrangements and they begin recording a string of new instrumentals including: El Simpático (1951), Yapeyú (1951), El Puntazo (1952), and Independencia (1953).

Tango Orchestras often re-record their songs, often with different arrangements that highlight changes within the orchestra or to feature a new singer. In the 1950s, D'Arienzo re-records many of his previous hits, perhaps for the reasons mentioned above or because of a advancements in recording technology. He re-records the following instrumental hits including, Don Juan (1950), Joaquina (1953), Felicia (1954), El Irresistible (1954), El Internado (1954), El Choclo (1954), Jueves (1955), Loca (1955), along with the vocal numbers, Paciencia (1951) and Trago Amargo (1954), featuring Echagüe.

There is one recording that stands out amongst all the others from this period and that is "La Cumparsita." D'Arienzo recorded "La Cumparsita" a total of 7 times thoughout his career (1928, 1929, 1937, 1943, 1951, 1963, and 1971), but the 1951 version is considered, by many, to be the gold standard. This version is often played at the end of milongas and all good dancers know the pauses by heart. It is a playful version of the song with amazing piano runs, a masterful bandoneon solo, a soulful violin solo, a riveting piano solo and finally ends with another violin solo. Everyone in the orchestra gets to shine.

In 1957, Echagüe and Laborde left the orchestra and were replaced by Jorge Valdéz and Maria Bustos. Salamanca also left the orchestra in 1957 and Juan Polito returned to the orchestra. Many critics describe the music created during this period as campy, with D'Arienzo focusing more on the singers, performing in an overly dramatic style, and aiming for a more mass appeal. It is hard to argue with this, but one song that stands out for me is "Chirusa."

Chirusa was an original composition of D'Arienzo's with lyrics by Nolo López. It was recorded in 1958 with Jorge Valdéz on vocals. This is not a particuarly good song for dancing, but tango is about much more than just dancing, even when it comes to D'Arienzo.

In the late 50s, D'Arienzo was invited to Japan, where tango was very popular (and still is). However, D'Arienzo was afraid of flying and refused. In his own words,

"Hirohito sent me a blank check so that I could write the amount I liked to go to Tokyo. I answered him that it was not a question of money but of planes. He sent me a message that I could travel by ship, but it would take about forty days. What do I do while looking at the sky and the sea for forty days?"3

The 1960s and 1970s
In the 60s and 70s, D'Arienzo really continued with the sound that he had been developing the late 50s, with overly complex instrumentation and dramatic singing, although he did record many more instrumentals. He re-recorded many of his songs again, now in stereo, for the popular "For Export" series.

For the first part of the 60s, he continued to work with Valdéz. He also began working with Osvaldo Ramos. Echagüe and Laborde also returned.

In the 60s and 70s, D'Arienzo and his orchestra appeared on many television shows, below are 6 of those performances (click in the upper left to see the playlist):

D'Arienzo kept recording and playing live shows as long as he could,

"I am a great optimist. A happy guy, a joker. I love to make jokes and the only thing I want is to go on with my orchestra even though I know I'm no longer a young boy, that I have to take care of my health and that I cannot spend so much energy as before. However, when I am on the stage, I always perform a show. And I don't do it because I'm a funny fellow. I do it because I feel tango like that. It's my way of being."3

D'Arienzo recorded his last tangos in January of 1975 and passed away on January 14, 1976. During his long career, he recorded over 1,000 tangos, valses, and milongas. He composed 46 tangos and wrote the lyrics for 3. His music still drive dancers to the dance floor, where he will always be remember as “El Rey del Compas” (The King of the Beat)!